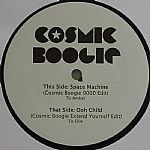 How’s your space-funk at the moment? Not so good eh? Not to worry, those crazy boys over at cosmicboogie.co.uk have just dropped two tripped out seventies classics that are so massive they could be seen from orbit. Space Machine floats lazily into your ears on a slo-mo funk break, is shortly joined by the vocals of Undisputed Truth lead singer Joe Harris who unleashes some classic acid-fuelled bollocks about how, “Our mission here on earth is peaceful/ We wanna free your funky mind,” and then the guitars kick in like the mothership taking off. Not quite sure how the dancefloor will take to it though. Drop it at the wrong time and you’ll be patrolling the galaxy on your own, get it just right and you’ll probably be able to establish an off-world colony based around free love. Ooh Child, on the other hand, is a more straight up sort of spacey disco funk. Mind you, given the nature of the genre that’s like saying George Clinton was ‘a bit less’ flamboyant than Bootsy Collins.
Out now on Cosmic Boogie