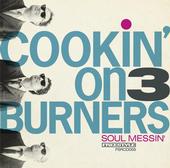 The Melbourne funk mafia strikes again. Yep it’s all a bit like that down there – what with this lot sharing guitarist Lance Ferguson full-time with The Bamboos as well as both bands using two of the same vocalists in Kylie Auldist and Fallon Williams. And it has to be said that – as you might expect – the musical output of these associated acts isn’t wildly different. Like The Bamboos the ‘ Burners regularly plough the JBs furrow and The Meters furrow and sometimes the Blue Note furrow though where, for their third LP, The Bamboos opted for a more heavily northern soul influenced direction, Cookin on 3 Burners continue to pastiche their normal influences but – and here’s the science – changing things up from their excellent debut by playing about a third of the tracks very fast.
The first three tracks on this LP are a case in point. Auldist featuring opener Push It Up showcases this lady’s fantastic voice – not a million miles from Marva Whitney – over breakneck percussion. Instrumentals Four n Twenty and Tokyo Saucer maintain a knackering pace before the early-Meters-esque Dog Wash restores sanity. The Burner’s bid for chart success comes in the forms of super-smooth chilled summer anthem, This Girl – the second track to feature Auldist. It ought to be a Duffy/ Adele-slayer (if it gets enough exposure) – not just because Auldist’s voice is the equal of theirs but because the music is being played for the love and not by session-mercenaries. This lot always fare better on the vocal tracks anyway and unbelieveably they not only hook up with one of the best current female funk singers but with one of the best male ones too. Fallon Williams has every bit the raw soul possessed by Lee Fields or Charles Bradley and I’d take him for preference every time. Hole In My Pocket finds him waxing lyrical about being skint over some (thankfully) slower funky picking but the LP highlight has to be his second contribution – the raw soul of Seen Through Your Disguise where he returns to the familiar theme of finding out your missus has done the dirty on you. Where Baked, Broiled And Fried delivered a Gorrillaz cover, Soul Messin’ throws up a (fast) Hammond funk version of Gary Numan’s Cars which works pretty much, though – again – I suspect a slightly slower and lower version would have more dancefloor success. Goose It Up could be a Beastie Boys funkstrumental, Piranha is another Meters-ish effort and then the band end the album in the exact opposite manner to which they began with two slow burners, the so-so Soul Messin’ and the almost blues-y The Proving Grounds.
Technically this is very tight but I can’t shake the feeling that something ain’t right (have that for a song title!) – though I can’t quite put my finger on it. While this isn’t lacking in either quality tunes and crossover potential there isn’t an obvious dancefloor hit of which the last LP had several. Maybe it’s also to do with the order of the tracks. Certainly having 3 very fast tracks at the beginning, two of which are far from album highlights was a mistake. Like it or not people listen to the starts of albums more than they listen to the ends and while these ultra-fast numbers might technically be funk they’re also a bit too clinical at times. I had to check that I wasn’t actually listening to The Poets Of Rhythm at one point. There’s a reason The Meters didn’t play at 140 bpm and I doubt it was because they couldn’t. Funk is musical sex and it ain’t all about doing it as fast as you can right?
Out now on Freestyle.