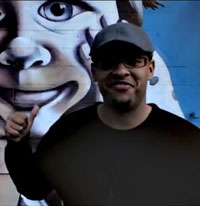 This week’s ‘most like BDP hip-hop throwback single’ slot is filled by a video for the John Graham-featuring Back 2 Basics off Configa’s Calm Before The Storm mixtape. So anyone who’s into the “90s Euro-house-plus-shit rapper or faded old has-been emcee” that passes for mainstream hip-hop these days should pass right along. On the other hand, anyone who wants crisp, minimal, boom-bap dope, will need to go and collect a change of trousers this instant or at least after watching the video and previewing the mixtape below. File along with other UK producers who work with hot-shit stateside rappers like Danny Spice, The P Brothers, Audio Ad and DJ Format.

Posted on 4th January 2012 no comments