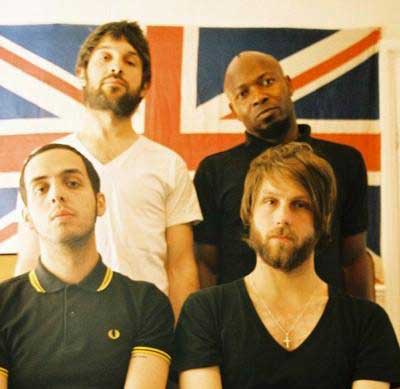 COMPETITION CLOSED
Garage-rock/ soul crossover kings The Heavy released their second LP The House That Dirt Built last month and you know you want a piece of that action. Well, here’s your chance: the first two correct answers to the question that follows will WIN:(COMPETITION CLOSED – congratulations Trev and Alison!)
1. A CD copy of The Heavy’s current LP The House That Dirt Built
2. Free entry to the band’s upcoming gig on 26 November 2009 at the aptly named (considering the line up) Garage in Highbury (support acts POLSKY, In The Black and Rough Science)
…all courtesy of Soundcrash Productions. Here’s the question:

What hamlet near the city of Bath do The Heavy come from?

There now – easier than a Richard & Judy phone-in and not rigged. Get your skates on. Mail answers to:

N.B. You must include:
1. Your name (so you can be put on the guestlist)
2. Your address (so that the CD can be mailed to you).

Here’s some press guff about the band…
(PRESS RELEASE) Taking the stage of the recently, awesomely refurbished Garage this November are the hottest, dirtiest band of the moment; with their new album ‘The House that dirt built’ tearing up systems across the country and riding on the back of a host of amazing reviews (including ‘single of the day’ for ‘How you like me now’ in Q magazine and a guest appearance on Jonathon Ross’s Radio 2 show!) The Heavy are set to crush your ears with their own eclectic brand of music.
In Noid, a tiny hamlet situated to the south west of Bath, some of the most dangerous and ill sounding beats and riffs are being created by four wolf like personalities. The Heavy started out ripping and chopping beats from the likes of Bo Diddley, Little Walter and The Parliaments and fusing them with their now patented brand of high grade dirt. Guitar riffs that intoxicate, bass lines that reverberate around your head like a King Jammy dream and vocals that will challenge any of the genres they decide to take on. And they continually cross genres; as a unit they’re proud to be completely musically schizophrenic. From country to rhythm and blues, garage punk to rock and roll, Studio one to the slums of shaolin, you’ll find that The Heavy are indeed like a pack of chefs with the way that genres get cooked up, blended, stirred and then mixed, to create their own unique style of rock and roll.
The album Great Vengeance and Furious Fire released on Counter Records in late 2007 generated a great deal of interest with songs like That kind of man, Girl, Set me free, Coleen and Dignity, firmly laying foundations for the house of dirt that they are building at present. There is no other band that sound as raw as The Sonics while holding soul in a headlock and frequently wrestling rock to the ground with the weight of Mr 808 as tag team partner. Listen, then try and tell Louis different.
You will not experience another band like this ….So dirty. So much weight. So much energy and laced with a soul that you just don’t hear anymore……..The Heavy have indeed created a monster.

Posted on 16th November 2009 no comments