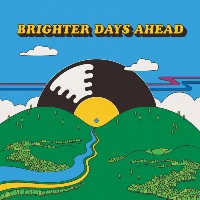 When Covid hit last year, Colemine Records figured that in the absence of gigs, with pressing plants closed and tours off the menu for the foreseeable, maybe their normal release schedule wasn’t quite the thing. And so they flipped the script and came up with their Brighter Days Ahead summer single series. The idea was simple – release a single every Friday throughout the summer from someone on either the Colemine roster or that of imprint Karma Chief, thus netting a bit of income for the artists as well as giving the fans both a regular treat plus a taster of things to come when days were – well – brighter. So it was that twenty-two tracks got released overall – some of which you may have read about on MB .

Of course, at the start of the pandemic, it wasn’t immediately clear what a total pig’s arse certain governments were going to make out of handling the crisis, though multiple worst-case scenarios have since come to pass and brighter days ahead have signally failed to arrive. Brighter Days Ahead the vinyl LP, on the other hand, will arrive very shortly, collecting together all of the tracks released as part of the campaign.  One of the two vinyl discs included comes in yellow and the other in blue.  The Colemine record features predominantly retro-soul of the cinematic funk variety (Monophonics side project The Ironsides’ Sommer), lowrider soul (Thee Sinseers’ What’s His Name) and rootsy reggae (Jr. Thomas & The Volcanoes’ Sunk In The Mist) but keep your ears peeled also for Ben Pirani’s blistering northern soul-ish cut More Than A Memory, Ikebe Shakedown’s Ennio Morricone cover Adonai and The Winston Brother’s fat slab of psych-funk, Winston Theme. The Karma Chief disc features the imprint’s more seventies-rock-influenced output including the West Coast mellowness of Andrew Gabbard’s Cloud Of Smoke, Young Gun, Silver Fox’s yacht-rocking Baby Girl and GA-20’s barroom blues cut I Ain’t Got You but on this one you’ll especially want to check out The Gabbard Brothers’ dreamy Too Much To Feel and a demo version of Neal Francis’ Changes LP title track.
(Out Feb. 19 on Colemine Records)