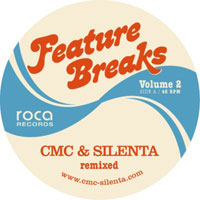 Second release in CMC & Silenta’s Feature Breaks series on their Roca imprint and they’ve opened up their back catalogue for remixing. It has to be said that this could be tantamount to handing a nutter some garden shears and getting your wedding tackle out, depending on who you’ve got on remix duties. Never fear though, half the ghetto funk universe were already queueing up to get in on the project. Weighing in at the more synthesized, cross-genre pollinatory end of the bass music spectrum there’s action from Basement Freaks, The Captain, The Funk Hunters, Tom Drummond, D*Funk, Rory Hoy, Prosper, Nine Lives The Cat and Rob Da Rhythm spanning the musical spectrum from breaks to dnb to moombah. It’s got to be better than David Guetta. Chek!
(Out 28 November on Roca Records)

(PRESS RELEASE)
After the huge success of our debut “Feature Breaks” release – hitting the top of the Juno Breaks chart – we are pleased to announce the release of “Feature Breaks Vol.2 – CMC&Silenta Remixed.”__This release comes packed with 4 massive remixes from some of the best artists faround the world in the Ghetto Funk & Breaks genre. Expect some hot dancefloor weapons from Basement Freaks, The Captain, NineLives The Cat vs Rob da Rhythm, and The Funk Hunters, the new shining stars coming out of Canada and ones to watch for on the growing Ghetto Funk scene!__”Is It True feat. Richard Kim” is remixed on the A-Side:__A1) The Funk Hunters remix takes the well deserved A1 spot on this vinyl with huge ghetto funk drums leading into some funky synth work and big fat basslines, all peppered with the vocal stylings of Richard Kim. The large and creative sound design on this remix delivers you the perfect dance floor heater!_A2) The Captain remix holds true to the original D’n B spirit but it’s been reworked with bigger drums and more fire for the clubs around the world. Fab has created a D’n B monster with his signature bossa style!__On the B-Side you’ll find two new versions of “Get It On Now feat. MC Fava:”__B1) Just listen to the remix by Basement Freaks and you’ll instantly know why he is one of the most wanted producers in the scene right now. His ability to craft the perfect arrangement, a balanced soundscape, and massive beats and bass makes this remix a big funky stomper!_B2) The NineLives The Cat vs Rob Da Rhythm interpretation of “Get It On Now” takes you straight into the streets of NY City where you can feel the pulsing beat of a metropolitan nightclub with this huge Moombahton remix.