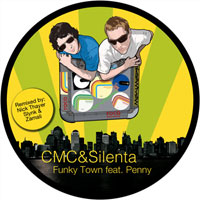 Manmade Records’ big boss men, CMC and Silenta have just dropped this party cut on their other label Roca which revolves around the old Banbarra Shack Up beat made famous by (among others) Stetsasonic on Talkin’ All That Jazz. This is the fastest I’ve ever heard it used though and it triggers the bpm radar at a nu funkin 127 bpm or thereabouts. Keeping up is MC Penny wryly observing, “Too sick, comin’ through with my toothpick/ Any style old school, except on the new shit,” among the organs, guitars and synths. There’s also some whistling on it which is a bit Bob Sinclar really but when you think that the Germans have long held an inexplicable love for ‘king whistle’ himself, Roger Whittaker – it could have been worse. Highly respectable remixes come from some big names who all use a different break and fly off at all kinds of sub-generic tangents, to wit: Nick Thayer going (obviously) ghetto funk, Zamali heading for a nu funk/ afro funk hybrid and Slynk seemingly unable to decide on sixties funk or seventies disco and ultimately plumping for both. And why not?
(Out now on Roca Records)

PRESS RELEASE
Funky Town is the answer from CMC&Silenta for all the people out there who only know their Mashup Releases. The first single featuring MC Penny out of Benin (West Africa) goes straight to the legs and was made for the dancefloor. With its unique lightness and funky riffs it’s something for the summer festivals and club nights all over the world. The killer remixes from Nick Thayer, Slynk & Zamali will get you straight to the dance floore. Nick did an amazing ghettofunk anthem out of it, with a rolling bass line and catching up the the funky guitar licks. Slynk whipped the track up with a brass hook to bring back the late 60s funk feeling combined with his unique disco style. The last remix on this 12 inch is a great afro beat remix by Zamali, to bring back the heat in the rhythm of the night.