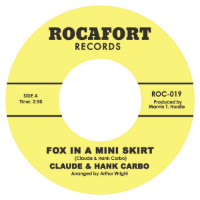 This is what it’s all about right here, so a whole first and second line of props to Rocafort Records who contrive to get Claude & Hank Carbo’s Fox In A Miniskirt and Hank Carbo’s Bad Luck together on 45 for the first time. The A-side is the two brothers’ chunky Crescent City soul burner from ’68 rich in horns and inspired by the hot chick who once hove into view at gig while the Carbos were playing. The B-side on the other hand is Hank’s stank slab of solo funk which allows a bit more space for breaks to roll, the bass to pop and the geetar to wah-wah. Vintage funk-soul 45 perfection in other words. Incidentally, if the name Claude Carbo sounds familiar, your surname’s either Wright or Darge and you’ve spent an unhealthy amount of time in Miami-based warehouses full of ancient vinyl or you own at least one New Orleans Funk comp. from Soul Jazz. Promise me you won’t sleep now!
(Out 11 August on Rocafort Records)