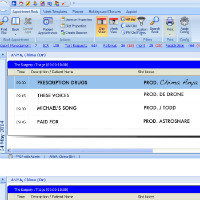 You can’t say that Chima Anya doesn’t rap about what he knows about since, unlike that charlatan Dre, he is actually a practising doctor of medicine. Thus straddling two worlds, he is painfully aware of the way rap lyrics have traditionally tended to glorify the dealing and consumption of narcotics without providing a contrasting voice. Here he aims to rectify that. You may be aware of the running joke that the NHS prescribes paracetamol for anything from the common cold to global flu pandemics. In Prescription however, Anya employs the medium of paranoid downtempo hip-hop to tackle the murkily corrupt world of multi-billion pound ‘big pharma’ private companies who provide the NHS with proper drugs like Tamiflu. Which turned out to be a massive con that was little more effective than – er – paracetamol. Of course the NHS is far from perfect itself. Surely it would be better if it was privatised and followed the impeccable record of the private sector. Like those nice big pharma companies, for example, who absolutely hold your best interests above their profits. Honestly – it’s enough to make you hear voices. A bit like the narrator of second track These Voices say – who I diagnose (without any medical qualifications whatsoever) as probably schizophrenic. You wanna take some paracetamol for that mate. Cop the Surgery Triage EP below: