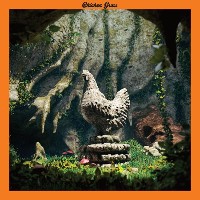 MB regulars may remember the name Chicken Grass from the band’s excellent New Orleans funk 45-style bump, Snakebites featuring Princess Shaw which provided one of the funk single highlights of last year. Turns out the band have actually been knocking about for a quarter century though and furthermore that they have finally decided to release their debut self-titled LP. I think we can all agree that better is late than never however and probably just as well if we do given that the monkey is posting about the album nearly two months after its release. Showcasing a range of funky styles, the album was recorded by the five-piece in Berlin on vintage gear at the Philophon studio with Grammy-award-winning producer Max Weissenfeldt – a man who has previously applied his talents to the work of both Poets Of The Rhythm and Dr John.

The nine-tracker features both cuts off the aforementioned 45; B-side Trading Places as well as Snakebites and the great news is that Princess Shaw features on another of the album’s highlights – a gospel soul-ish chugger entitled Sister Rosetta’s Train. The pick of the rest of the set are a pair of cuts you’ll definitely want to keep your ears pinned back for too: the Jimmy Castor Bunch vibes of uptempo dancefloor burner Have A Break, and the psychedelic swamp-funky Woman (Monte Carlo Mix) coming on like late-period Meters material. Get down!
(Out now on Cattrack Records)