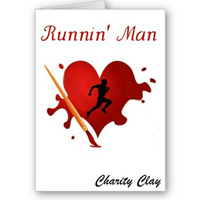 Last heard on Savant’s Soul Music cut, here’s Charity Clay fresh for Valentine’s Day flying the flag for female rappers. Well, someone’s got to, they’re not exactly high profile these days are they? Apart from Nicki Minaj obviously. The Runnin’ Man of the title is of course your archetypal man whose ‘commitment early warning system’ runs at better than military spec and who can be found fishtailing off down the road in panic in his motor before she’s even finished voicing such terrifying utterances as, ‘it’s our one-month anniversary tomorrow.’ Our sassy Charity’s on hand though to calm the startled male of the species with verbal balm about how she’s, “In it for the long haul.” Er – hold on a minute Charity – not sure you’ve really tapped into the male psyche there – haven’t you got something a bit more sex-related? What’s that? “Turn…[him]…on like the oven”? That ought to work perfectly. And they say romance is dead. Charity Clay’s love rap then, just in time for Valentine’s. If you like this you’ll want to know that her LP The Smokey Winston Project Redux is due for release soon. File alongside Jean Grae.
(Out now)