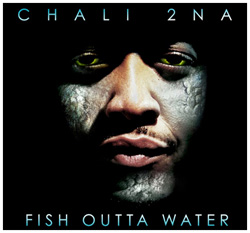 I’m tempted to ask if fish out of water suck or blow as there are times when this does a bit of both – musically anyway. Now before you get all, “Whoah – someone’s bitter because Jurassic 5 split up!” – it’s not like that – although I can see when I tell you the most Jurassic 5-like track on this (arguably Comin’ Thru) is not only far and away the best one – a banger even – it isn’t going to help my case. I think J-5’s number was up when they split anyway – at least collaboratively – with rumours of metastasizing egos and all, though Feedback wasn’t a bad LP. In any case, while Comin’ Thru maintains the J-5 penchant for a funky boom-bap break and hook (perhaps because it was produced by Nu-Mark) it dispenses with the ’dusty breaks’ sound and offers a noticeably cleaner modern-sounding production. And it’s not just the groove that works, for 2Na’s lyrics on it, while playful, are clever enough, “I’m much more than just some backpack crap/ Intelligent rap act or militant black cat… I’m/ Killin’ venemous platinum plaque rats” – so I was kind of hoping for more in this vain. Which brings me to the rest of the LP.
I’m all for 2Na wanting to move away from the J5 sound – he quite clearly wanted to expand his comfort zone – something the LP title reflects and which is both understandable and laudable – what’s a pity is that he didn’t have more success. The paths he has chosen to move in are largely avenues of dullness and the rest of the LP is a hotch-potch of styles and guest spots (including one from the ubiquitous Damien Marley) that never really finds its stride. 2Na’s knack for giving things ironic titles continues with opener Get Focused. If only. A sparse funky bounce, it’s a so-so intro in which 2Na gets the first hit in at the haters in that unmistakeable baritone, “Pigeonholed by people who hate change/ A decision broken can never be maintained.” It is succeeded by the Beenie Man-featuring synth-clap annoyance (complete with a chorus that I swear uses the melody from 80s Brit-kids cartoon Dangermouse) So Crazy. It’s fair to say that quite a lot of the tracks on this have that minimal synth sound (presumably to emphasise his stylistic move away from J-5) but there’s nothing distinctive about any of these that you haven’t heard a million times before. Don’t Stop is mid-tempo RnB-hop with a vocal ‘hook’ from Anthony Hamilton but fails to quicken the pulse – something it has in common with Choklate vehicle Keep Goin. Love’s Gonna Getcha’s Black-Eyed Peas-minus-Fergie style is at least memorable enough to constitute a 2Na bid for chart recognition and Righteous Way would be affecting were the pathos of a tale about fatherhood not undermined by the bathos of scratching with a baby’s cry. I shit you not. Controlled Coincidence sees Kanetic Source drop by and it’s muted strings and handclap combo sounds quite good but by this time I’m not sure whether that’s ‘quite good’ as in ‘quite good’ or ‘quite good’ as in ‘ quite good in comparison to the rest of the LP’. I can’t be arsed to tell you about any more tracks.
In short, 2Na is as lyrically competent as always, and the production on Fish Outta Water (which includes turns by some heavy hitters – Scott Storch and Jake One to name two) is ok. Shame about the music then. Beg, borrow, steal (or actually buy) Comin’ Thru (incidentally first released four years ago) and ponder on what might have been and may be in the future. It’ll be interesting to see which track(s) off this will be remembered four years hence.
Out now on Decon US