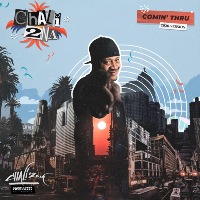 ‘Verbal Herman Munster’ Chali 2Na continues his current campaign of re-imagining cuts off his ten year old solo LP debut Fish Outta Water with a re-rub of the best track on the album in question, the Nu-Mark-produced Comin’ Thru. The original’s success lay in the simplicity of its boom-bap dancefloor dynamics delivering all the vibe of the best Jurassic 5 cuts but with only one of the emcees and one of the DJ/producers. The 2020 version is a collab. with Ozomatli and House Of Vibe and the main change is the replacement of the original’s drum break with Brazilian style percussion for that full hip-hop carnival vibe. Turns out it’s a bit of a grower.  It ends up not a million miles from the sound Prince Paul-project Brookzill! were working on a few years ago.
(Out now on Westwood Recordings)

Posted on 21st November 2020 no comments