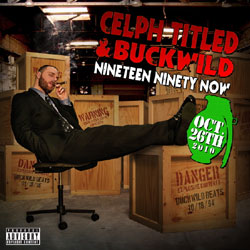 Nineteen Ninety Now finds Army Of The Pharaohs cohort Celph-Titled spitting contemporary verse over some slept-on ‘90s beats from D.I.T.C. producer Buckwild. Hence the name. Get it? It’s no news that much of what passes for hip-hop these days is far from great, so going forward to the past is certainly one solution. The question will be whether this resurrects nineties glory or nineties folly and with only a backpack’s width to play with there’s little margin for error. These two should give you some flavour however:
Listen to Styles Ain’t Raw HERE
and
Listen to Step Correctly HERE (scroll below pic) (courtesy of onsmash.com)
Press guff below.
(PRESS RELEASE) CELPH TITLED & BUCKWILD TRANSPORT YOU TO NINETEEN NINETY NOW
Nineteen Ninety Now Features Appearances From Treach, Vinnie Paz, Apathy, Diamond D, Sadat X, Grand Puba, Chino XL, Esoteric, A.G, R.A. The Rugged Man & O.C
Its finally here and a hip-hop renaissance is about to begin showing that the lessons from the past can be combined with the innovations of the present, as Celph Titled and Buckwild have joined forces to create a neo-classic with Nineteen Ninety Now; bringing the art form full-circle through this groundbreaking collaboration. By having uninhibited access to legendary producer Buckwild’s original mid-90’s production, Celph Titled was able to select and record to over 16 unreleased bangers; bringing his charismatic flow and lyrical prowess to each one.
Nineteen Ninety Now is more than a collaboration of great minds with impeccable taste; it’s also the long awaited debut album from Celph Titled, who already has gained a huge underground following as a core member of Jedi Mind Tricks’ Army of the Pharaohs crew, his own trademark Demigodz releases and his involvement in Mike Shinoda’s Fort Minor project. While Celph is a producer in his own right, the chance to work with Buckwild and actually have the opportunity to capture the lost sound of the 90’s by utilizing vintage tracks from Buckwild’s vault that have never been heard before was a no-brainer—and here’s why. Multi-platinum producer Buckwild from the legendary Diggin’ In The Crates crew (D.I.T.C.) has produced countless classics over the last two decades for artists ranging from Artifacts, 50 Cent, Big L, Brand Nubian, CNN, Faith Evans, Fat Joe, Jadakiss, Diddy, The Game, Redman, Shyne, Swizz Beatz, Big Pun and Jay-Z. To boot, he’s also the producer behind indelible classics from Notorious B.I.G (“I Got A Story To Tell”), Black Rob (“Whoa”), O.C. (“Times Up”) and Organized Konfusion (“Stress”).
Revisiting the classic SP-1200 and Akai-S950 sound that reigned supreme in Hip-Hop’s “Golden Era,” the beats on Nineteen Ninety Now were originally produced by Buckwild between the years of 1994-1995–but never recorded to. Buckwild fondly recalls what it was like to dig back into those crates “although I’ve stayed ahead of the times as a producer, it was a lot of fun to load up these old disks. Joints I forgot I even had, stuff I haven’t heard in 15-years. It was definitely a welcomed experiment that turned out amazing. Further, he comments on the concept he and Celph embarked on and its possibilities in the future “essentially this is a concept album that’s a first of its kind. I wanted to be able to resurrect a 90’s sound that once was and combine it with 2010 rhymes. I consider this album to be monumental because it could literally not only change the game, but change the way people feel. Dudes complain about the game but they ain’t doing anything. Nobody has done this concept before us. I wouldn’t be surprised if this creates a demand for other MC’s and producers who were around in the 90’s to get together and dig through shoeboxes of floppy disks to feed the fans more of the lost sound they still crave for and I’m all for it.”
While Celph has enjoyed success with his Demigodz crew and all of his endeavors, it may surprise some that Nineteen Ninety Now is his true debut and the importance of this project was not lost on him, as he laments on how meticulous the recording process was for this project “We took three-years to construct this album. This is the project I’ve always wanted to do. To have my debut solo-album produced entirely by a legend like Buckwild can’t be topped in my mind. My first album is always going to be looked at as a masterpiece to all my fans.”
Celph also comments on why harkening back into this very specific time period of Hip-Hop is moving forward and not backward “It’s actually refreshing to hear authentic beats produced in the 90’s finally unveiled. It reminds you of all the dope production methods and sounds that are no longer used today. Nineteen Ninety Now takes you right back to that feeling–even if it’s just for one album.”
Celph Titled and Buckwild will release Nineteen Ninety Now on 10-26-2010 on No Sleep Recordings.
Celph Titled & Buckwild – Nineteen Ninety Now LP – tracklist
1.) The Deal Maker
2.) Out To Lunch f/Treach of Naughty By Nature
3.) Eraserheads f/Vinnie Paz of Jedi Mind Tricks
4.) F*ckmaster Sex
5.) Swashbuckling f/Apathy, Ryu & Esoteric
6.) I Could Write A Rhyme
7.) Hardcore Data
8.) Mad Ammo f/F.T. & R.A. The Rugged Man
9.) Tingin’
10.) There Will Be Blood f/Sadat X, Grand Puba, A.G., O.C. & Diamond D
11.) Miss Those Days
12.) Step Correctly
13.) Wack Juice
14.) Styles Ain’t Raw f/Apathy & Chino XL
15.) Where I Are
16.) Time Travels On f/Majik Most & Dutchmassive