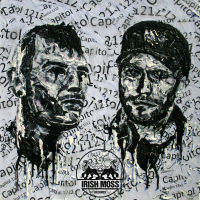 “Don’t hurt your head if you never get what you expect” urges superstylin’ former Groove Armada collaborator M.A.D. as the storm surge of 140 bpm breaks n bass that is Worldwide Echo, hits your ears. Then, during the occasional roots reggae breakdown, this very same M.A.D. encourages you to describe how the “big sound echo” makes you feel (like he doesn’t know) and slyly intones the word ‘echo’ into your reeling forebrain until you’re unsure if it’s him or – well – some sort of echo. And who are the sinister bass puppetmasters pulling the strings here? It’s Capitol 1212 of course, fresh from being nominated in the Scottish Music Awards ‘Best hip-hop’ category. Not ones to be pigeonholed then. Assorted remixes come in tow but I’m digging Numa Crew‘s subterranean dub beast and Funkanomics‘ twitchy ghetto jazz versions best.
(Out 24 February on Irish Moss Records)

Posted on 19th February 2014 no comments