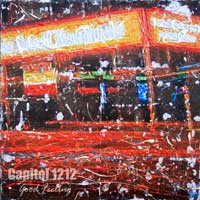 Word on the street has it that Capitol 1212 a.k.a production team Professa Fresh and Fly-T are working on their debut LP and if their last single Good Feeling was anything to go by, that should give you more than a twitch in your pants. For those who missed it the other year, Good Feeling was a phat party hip-hop posse cut – a posse, incidentally, which included no lesser rhyming talents than Dizzy Dustin of Ugly Duckling and Mike G of Jungle Brothers. And now it’s up for free download. Cop it while it’s hot off the player below and read the monkey’s original 5 star recommendation of it HERE.