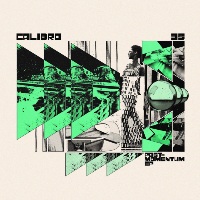 Cult Italian ‘cinematic funk’ fiends Calibro 35 return a mere 17 months after their last album, Momentum, with the Post-Momentum EP. And if that name suggests the two might be linked, well, you’d be right. Not least of the reasons for which is the fact that this release is bookended by two versions of LP track Stan Lee. This one was something of departure for a band known for their instrumental output and the Momentum version featured Slum Village rapper Illa J.  On the EP however, one version is instrumental while the other features Italian rap dons Ensi and Ghemon. Between these two extremities lie a further four cuts. Digi Tails provides more of the late 70s/ early 80s-influenced sort of material that characterised much of Momentum and is heavy on the synths. Being A Robot Is Awesome employs sci-fi samples as a robotic female voice compares and contrasts the nature of humans and robots, switching from squelchy sci-funk vibes for a jarring bridge (presumably to symbolise the moment at which Skynet becomes sentient or something) before returning to the funk – albeit more abrasively. On this note, another Momentum track also appears in revised form and it just happens to be that LP’s other vocal track. Whereas London rapper MEI graced the mic on that, this one is entitled Artifical Black Moon and appears to have a contribution from Hanson Robotics’ alleged AI – a.k.a. creepy ‘chatbot with a face,’ Sophia – who looks just a little bit too close to Ava the creepy actual AI in Alex Garland’s, Ex Machina. And has a grammar problem and is a gold digger. What could possibly go wrong for the future of mankind? One suspects a bit of implied social commentary here as well as commentary on ethics and morals. Perhaps best of all is Stars And Stripes, Chirps and Bleeps, though which, despite the title is by far the funkiest and harks back to the sci-fi OSTs of the late 60s/ early 70s as well as the band’s earlier output.  Oh and you’ll be pleased to know it will be released on clear 12″ vinyl.
(Out now (digital)/ Out 9 July on (vinyl) on Record Kicks)