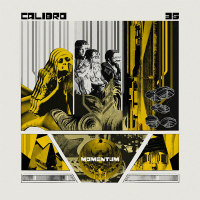 I hope you’re ready for new Calibro 35 material for here is the Italian cult combo with new single Stan Lee featuring none other than Slum Village rapper Illa J.  Well – why wait for the likes of Dre and Jay-Z to pick up on you (and both have previously sampled this Italian outfit) when you can miss out the middle man. And the band are certainly getting their money’s worth since Illa J both raps and sings on the track, employing for the latter the falsetto that he also used on his own Sam Cook single a couple of years back. Meanwhile the band employs as rich a palette of sounds as they did on previous LP Decade, coming through strong with the soundtrack vibes and creating a layered beat that sounds much faster than its 88bpm or so due to rolling drums, frantic fills and ride cymbals.   Which is something to marvel at.  Or should that be Marvel at?  Stan Lee will feature on Calibro 35’s forthcoming studio long-player, Momentum, due February.
(Out now on Record Kicks)

Posted on 23rd November 2019 no comments