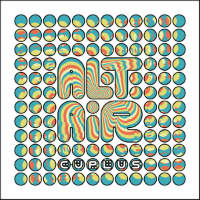 More quality emerges from abstract hip-hop’s Odessa files as Ukrainian producer C.J.Plus and keyboardist I-One employ vintage Soviet-era synthesizers like the Opus, Estradin-230 and Electronica EM25 along with Japanese Yamaha and Roland grooveboxes and also samples digitized from Soviet vinyl records to create nine-tracker Altair. Naturally naming your release after one of the brightest stars in the night sky and each track thereon after some other aspect of the cosmos implies a stellar thematic focus and indeed the beats certainly invoke a journey towards man’s final frontier.

The cuts range from slo-mo, breakbeat-driven electronica such as the opener and closer (the title track and Opus, respectively) to the pulsing space-funk of – er – Pulsar. Twin highlights are the groovy head-nod of Dialog and another track, Spectrum, which picks up from beatless tones to a lively cruise followed by the implementation of percussive overdrive and the achievement of trip-hop escape velocity. Captain, the engines can take it!
(Out now on Odbeats)

Posted on 14th November 2016 no comments