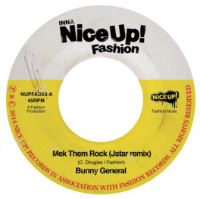 Say ‘Bunny General’ to people of a certain age and they’ll think of a big scary rabbit who runs his warren like a gulag. Then of course there’s also reggae/ dancehall star Bunny General whose released more singles than hot dinners you’ve had. I’ll let you work out which one veteran reggae remixer JStar has worked his magic on, suffice it to say, Mek Them Rock gets the full digi-dancehall treatment and (were it required) would be more than able to mount a successful full scale attack on its rivals and keep anything in its immediate vicinity cowering under an iron grip. Comes with an instro and will be appearing on a forthcoming comp. of such remixes – about which more soon.
(Out 29 September on Nice Up! Records)

Posted on 16th September 2014 no comments