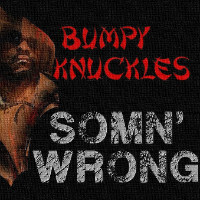 Two heavyweight original stateside boom-bap bumps in twenty four hours – what’s going on? This time around it’s Bumpy Knuckles a.k.a. Freddie Foxxx. And he’s a man with a bit of a pedigree: debut LP produced over twenty years ago by Eric B, cameos on tracks by the likes of BDP, OC, Naughty By Nature and Gang Starr back in the day. Oh yeah – and legend also has it that he missed a meeting scheduled with Eric B once in ’86 when the dj was looking for a rapper. Turns out some guy called Rakim didn’t miss his. Ouch. Anyway, Knuckles has an LP Lockd N The Lab out in late summer and before that releases The Mix Files EP of mostly new material including this grimy slice of NY fatness, Somn Wrong. With which there is absolutely nothing amiss. Produced by Freddie Foxxx. Yes – he did his own production. Which is also dope.
(Out 18 June on Gracie Productions)