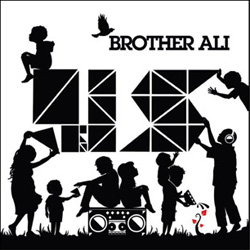 With the follow up to 2007’s Undisputed Truth, Ali is back delivering Rhymesayers’ most convincing drop in ages and, it has to be said, one of hip-hop’s. Jay Z recently pointed out that hip-hop is going through a period like rock went through in the mid-eighties when the hair ‘metal’ bands ran wild and real rock was flatlining, the implication being that a breath of fresh air is due. Then there’s Ali himself who, a while back, pointed out that there’s currently little originality in music and everyone is desperate for something different and good. Similar arguments then, a key difference being that Jay Z’s just released the hip-hop equivalent of a Whitesnake album while in the same analogy Ali might be seen as having more of a Pixies type role.
Featuring slightly fewer guest appearances than Jay-Z’s saggy offering, this LP nevertheless opens with one – none other than Chuck D, preaching about the state of the nation over a gospel chant and setting the general tone – characterising Ali as nothing less than a, “soldier in the war for love,..[who]…carries with him a message of hope and peace.” You’ve got to love a bit of dramatic licence, especially when the fiery soul horns of The Preacher and the beat kick in hard, with Ali claiming he’s, “…all off the chart.” But you know what? He ain’t lying. He spends large swathes of this album wading fearlessly through the moral slurry of American society, verbally sifting his unpleasant findings in that distinctive voice with the slightly manic waver.
You got issues? They’re probably dealt with on here, whether it be drug-dealing (House Keys), a pull-no-punches examination of slavery (The Travellers), child abuse (Babygirl), single-parent families (Bad MuFucker Pt II) or anything else he might have have missed out on Tight Rope. Then again you might find him indulging in some (not undeserved) hip-hop self-aggrandisement (The Preacher, Fresh Air, ‘Round Here, Best @it). Indeed, on ‘Round Here he appears to be indulging in some self-aggrandisement about how humble he is – “Fact about it, I’m a force of nature/ Leader of men, boss of my organisation/ I ain’t into being ostentatious”. No mean feat, I think you’ll agree. Oh yeah – and there’s a hip-hop love song – You Say (Puppy Love). Which is actually good.

Of course, while this might be travelling under Ali’s name, you can’t not recognise the massive contribution of beatmaker Ant. I don’t generally find myself in whole-hearted agreement with press release exaggeration but, on the one for Us, Ali and Ant were described as, “staying true to their soul and blues influence,” and the music as having a, “lush and dense sonic quality,” a description with which, on this rare occasion, it’s hard to disagree. The horns of Preacher already got a mention, Fresh Air adds some squelchy funk, and Breakin Dawn’s got that whole chain-gang breakin rocks at the roadside going on and Round Here’s fuzzed up bounce is as relevant as anything from the mainstream hip-hop camp – just classier. Then there’s the sad xylophones of The Travellers or the fifties Hollywood orchestral strings on You Say Puppy Love. Plus the beats are all diamond cutters.
In a nutshell, it’s musically the don, lyrically a blue-collar bomb, and arguably number one as far as hip-hop LPs go this year. So far anyway…hey – how’s that? A whole review and I didn’t even mention that Ali was albino or Muslim…
(Out 21 September on Rhymesayers)