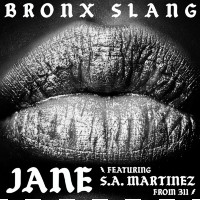 Bronx Slang’s by now heavily anticipated second LP is out this August but before then, here’s the next single Jane featuring singer SA Martinez of 311 and a minimal organ-laced boom-bap beat from Jadell. Once again Jerry Beeks and Ollie Miggs deliver reportage from the frontline of American social inequality with a cautionary tale about prostitute Jane – or rather (and especially manaña) – ‘Juana’. “Since the girl learned how to walk/ She burned the pockets outta any playboy in New York,” but it turns out a career turning tricks for gifts from a multitude of sugar daddies as romanticised in Pretty Woman is less a way to achieve the American Dream and rather more an experience characterised by self-hate and drug addiction. As a counterpoint to our rap heroes’ gritty commentary, their ‘ese’, SA, sings a melancholy chorus of pity and the whole thing ends, aptly echoing Jane’s Addiction song Jane Says, with the unlikely idea that Jane will ‘kick tomorrow.’
(Out now on Fabyl Recordings)