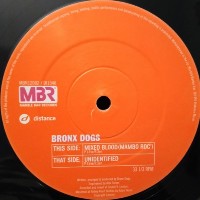 Sha lala la la oh oh-oh! Oh oh! Waaiiittt a minute. I remember that! Maybe not the original (I don’t think I found out where that bit came from) but the massive bit of Latin big beat in which it formed one of the key samples for sure – Bronx Dogs Mambo Roc. Bronx Dogs? You know – DJ Regal (ex-Wiseguys) and Richard Sen – active as Bronx Dogs in the late 90s and early noughties. Massive party track – in fact Sha lala la la oh oh-oh! Oh oh! ought to have been as well known a dancefloor rallying cry as Ooh La La. Someone else who thinks so is Steppin’ Tones and what do we do when we can’t get enough of something? That’s right we make an extended cheeky version! Or at least our Steppin’ Tones has. And it’s a free download to boot! Remember when any given month of posts on the monkey used to be liberally sprinkled with free DLs? Yeah – not so common now are they? So cop this for nowt and play it l.o.u.d!