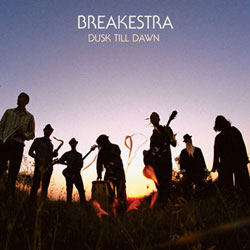 Get ready for L.A. funk massive Breakestra to drop the bomb in late September. Looks like it’s going to be a funky autumn as well as a funky summer…

(PRESS RELEASE) After a four-year break from the studio, L.A.’s finest practitioners of gritty soul/jazz, party funk & breaks, BREAKESTRA, return to the fray with a brand new studio album on Strut this September, ‘DUSK TILL DAWN’.

The brainchild of producer, engineer, songwriter and multi-instrumentalist “Music Man” Miles Tackett, Breakestra was formed from a love of golden era late ’80s / early ’90s hip hop and a fascination for the dusty samples that peppered the era’s classic records. From watching revered West coast DJs like Cut Chemist and Mixmaster Wolf cut up hip hop, funk and breaks, Tackett looked to form a live collective of musicians that could play the originals live with all of the same sounds, feel and musicianship. Through weekly jams at a local coffeehouse session called The Breaks, Breakestra was created.

From then on, with their base at fabled Thursday L.A. club night Rootdown, Breakestra became renowned as one of the great live funk bands of their era. Mixmaster Wolf, first persuaded off the decks at The Breaks to voice Bobby Byrd’s ‘I Know You Got Soul’, became a key voice and hypeman out front. An amorphous line-up of L.A.’s finest players, led by Tackett on bass and vocals, ensured that the grooves were kept super-tight with local musicians like drummer Pete McNeal (Z Trip’s band), James “The Funky Penguin” King (The Lions) and Jeremy Ruzumna (Macy Gray’s band) all a part of the Breakestra fold at different times.

The band’s recordings have been rare to savour, numbering an early live cassette-only mixtape, a handful of singles and second mixtape release on Stones Throw and a debut studio album, ‘Hit The Floor’, on Ubiquity in late 2005.

For 2009, Breakestra return with their long-awaited sophomore set exploring all colours of the funk spectrum. Built around the vision of “Music Man” Miles and Mixmaster Wolf (as well as producing, recording and writing the tracks, Miles performs bass, drums, guitars, cello, keys, percussion and vocals on the record), the trademark Breakestra touches remain intact: Wolf fronts tough breakbeat jams ‘Dark Clouds Rain Soul’ and Stones Throw single ‘Low Down Stank’; Miles himself brings his soulful vocals to ‘Need A Little Love’ and ‘I Don’t Wanna Wait’ and amazing new female vocalist Afrodyete recalls the heyday of JB’s Funky People on the terrific ‘Come On Over’. The album even journeys into psychedelic soul (on the fuzzy ‘Show Me The Way’) and stripped-back West African farfisa stylings on instrumental cut, ‘North-East To Nippon’.

‘Dusk Till Dawn’ is a tribute to Tackett’s late DJ partner at Rootdown, DJ Dusk, whose life was tragically taken in a road accident in 2007. Dusk himself appears alongside Jurassic 5’s Chali 2na on the funky rap joint ‘Posed To Be’ and the album is a fitting tribute to a much-loved L.A. figure and integral member of a scene which has become globally respected.

Breakestra’s ‘Dusk Till Dawn’ is released 25th September 2009 on Strut. The release will be accompanied by world tour dates beginning in October.