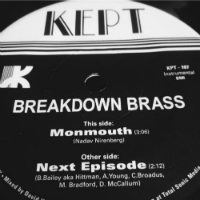 More funk from the rodeo city of Calgary as Kept Records get their 45 on once more and provide two cuts from Brooklyn-based Breakdown Brass. A-side Monmouth has horns menacing enough to kick off some sort of rebellion while B-side Next Episode may ring some hip-hop bells. Mainly because it’s a cover of that well-known Snoop Dizzle-featuring cut by Dre. Yes, that’s right, a brass band cover of Dre – since nobody should forget about him. Altogether now, “La-da da-da dahh!”
(Out 20 April on Kept Records)