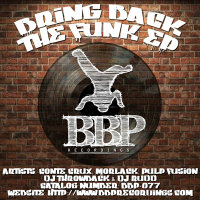 Bring back the funk EP? Oh what – chicken-scratch guitar and fatback drums? Gospel vox and butter slick basslines? Well – not exactly. Let’s just say this is a party breaks release that leaves the glitch and the grind and the wobble at home and settles for good old-fashioned big-ass party breaks. Well, I say ‘settles for’…that kind of makes it sound like some sort of timid acceptance whereas the four tracks on here firmly grasp the beat by the horns. New boy Conte Crux brings back Public Enemy disco style, Morlack brings back Mobb Deep in what sounds a bit like a Max Sedgley style and Pulpfusion Brings Back The Funk with – my word – is that a bit of Bobby Franklin’s Insanity buried deep in there? The laurels are brought back by DJs Rudd and http://soundcloud.com/djthrowback respectively though. Throwback because he’s managed to form a hook for The Hook from a version of folk pop oddity Cups (You’re Gonna Miss Me) and Rudd for lifting the hook off The Pack’s Jello (where, frankly, it was going to waste) and lobbing into the beat blender with the gibberish intro from The Marcels doo-wop anthem Blue Moon and somehow it all makes sense. Achievements both, I think you’ll agree – especially this latter blend which lyrically manifests as, “At the party I shake my ass, Bom ba ba bom ba bom ba bom bom ba ba bom ba ba bom ba ba dang a dang dang.”
(Out now on Breakbeat Paradise Recordings)

Posted on 5th September 2013 no comments