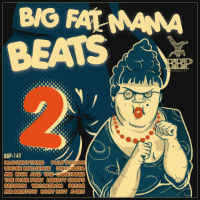 BBP’s latest comp. is Big Fat Mama Beats 2 – a second and even larger helping (ten tracks rather than seven) to follow-up last year’s first volume. As before, dismiss from your mind any notion suggested by the cover art or title of delicate or swinging tweaks of Big Maybelle tracks. What you’re getting here is industrial-sized slabs of fat funk breaks – for which read plenty of glitch and grind – though there’s more than enough of a 90s influence too. Discobeta re-version the dope of Black Moon’s old school Who Got The Props bump while there are two gigantic late 90s-style big beat bangers present – 54ru and Wiccatron’s The Ultimate Seduction and, even more epic, Under Influence & Rory Hoy’s Do What We Do. Elsewhere, the likes of Mr Rich & Caretaker and Liberty Chaps represent the new school while the punishing funky breaks of Pecoe’s Dance Sucka and the buzzsaw bass and staccato breakbeats of Mr Bristow’s To The Beat Y’All stand with a foot in both the old and new school camps. Should have the kids shakin’ what their mamas gave ’em.
(Out now on Breakbeat Paradise Recordings)