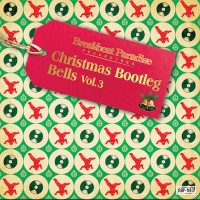 It’s nearly Christmas; it’s time to get seasonal on your ass! At least that’s what the Breakbeat Paradise crew have been thinking with the dropping of Christmas Bootleg Bells Vol. 3. Well kind of anyway since, unlike last year, they’re not celebrating Christmas with breakbeat booties of Christmas songs, just breakbeat booties of, well, non-Christmas songs. Actually, bar one – but more about that in a bit. This one is thirteen cuts deep and it’s down to label boss Badboe and his sometime partner in crime B-Side to knock out something that makes heavy use of Marcia Griffith’s rocksteady classic I Feel Like Jumping. After that it’s all grindy buzzsaw bass business for a bit from Boydex & Baxsta, Kakaow, Sonale and Boydex & JNRBoom before The Fritz returns things to sonic sanity with Pernalocius a rolling bit of what sounds very much like Brazilian breaks.  The Fun Police also get Back to Fun with a bit of Oz hip-hop, and then a man who knows a bit about dancefloor fun, Morlack, delivers the pumping and heavily Jones Girls-sampling 2 Nights Over Egypt. Kenny Beeper’s on hand as well to take the Wu in an electro boogie direction with his Gravel Pit remix, while Pecoe vies with Morlack for the most pumping cut with his Make It Bounce The final trio consists of the 70s-ish funky bounce of Super Saturated’s Happy Song, Gramophone Soul goes in for the kill on La Roux and finally – there’s a proper bit of Christmas cheer from Dal Platinum who proves the least Grinchy of by getting Hammond funky with Naughty By Nature and some sleighbells. Lovely. Where’s the egg-nog?
(Out now on Breakbeat Paradise Recordings)