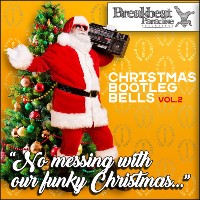 Breakbeat Paradise Records start the Christmas festivities early in 2020 (forgivably, you might agree, given the events of the preceding eleven months) by spreading advance Yuletide cheer with the Christmas Bootleg Bells Vol. 2 LP. The plan was simple – give the multifarious members of the BBP family the chance to rework classic funk and soul Christmas tracks (as opposed to more mainstream cheese) and then unleash them on the public at a bargain price and in a veritable feast of funk-related flavas.

For seasonal party breaks therefore, you might sample Badboe’s Funky Soul Xmas, Jayl Funk’s Otis Redding refix or DiscoBeta’s Backdoor Santa. Meanwhile Venture & Capital offer a plateful of something for the bass wobble fans, Clairvo delivers a Christmas reggae rerub and FunkinRight takes the Jackson 5 into full Christmas soul dnb territory. Some like things a little more mellow though and so it is that Fredy High and Mined & Forrest come bearing re-flipped sixties R&B as do Mako & Mr Bristow, though their Tinsel Tittyshaker is of the more uptempo variety and – well – what you might call a ‘tittyshaker.’ They’re also the only act to contribute more than one track, offering Stole Christmas by way of a Christmas counterpart to their Stank Soul Edits series which finds its closest spiritual companion in Second Hand Audio’s phat Rufus Thomas remix, I’ll Be Your Santa Baby. Should be something in that lot (and the rest) to bring a smile to everyone’s face and a seasonal shimmy to everyone’s hips.
(Out now on BBP)

Posted on 29th November 2020 no comments