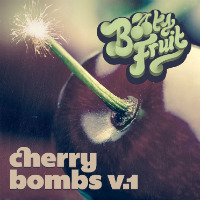 The latest installment of fruity booty from the Booty Fruit crew is the first in their new series (Cherry Bombs Vol. 1) which sees them lobbing four mashed-up hip-hop bangarangers right atcha. Far be it from them to launch the newness without recruiting the heavyweights though and so it is that Breakbeat Paradise label owner Badboe signs up for booty duty along with the UK’s Roast Beatz and Waggles and Booty Fruit men themselves, El Bomba & Hidden Riddim. Boe’s up first and certainly isn’t playing himself with what you might call ‘Jeru Tha Hotsteppa’. He’s followed by the Roaster who’s got Grand Puba locked into a mellow groove. I like it and – hey – it’s not a love song. The second half finds El Bomba & Hidden Riddim drop some pre-Ooh La La-style Wiseguys instro breaks and lastly things end as they began, on the dancefloor, with Waggles’ uptempo boogaloo Beasties banger Mash Up The Fun. Cherries. Gotta pop ’em. Get on it.
(Out 30 May on Booty Fruit)