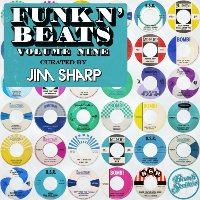 Covid cases might be on the rise again in 2021 but the Bombstrikes label nonetheless unleashes a second salvo of Funk N Beats to make up for last year’s absence and for Vol. 9 it’s the turn of Dusty Donuts crew member Jim Sharp to curate a twenty-two track selection of funky drum break-powered party ordnance that’s arguably slightly more hip-hop oriented than either of the last two though there’s still time for a bit of actual funk as well as party breakbeats.

Things begin and end on this one with hip-hop however, in the former case with Sharp’s 38 second Shut It Down intro. followed by his mellow remix of Sam Krats El Da Sensei-featuring Revive Rap while the closer is a track that deserves much better recognition than it actually has – Drumma Man from Stetsasonic’s Daddy-O. Other rap tracks of note are the inclusion of Lack Of Afro’s extremely funky Here We Go Again on which Wax and Herbal T trade bars, Ugly Duckling’s samba-based classic Rio De Janeiro and The ‘Jim Sharp Remix’ (naturally) of Ali B’s Afika NX-featuring Swing It – currently out on 45 if you’re quick enough to nab a copy.

Fans of party breakbeats are also well-served with a plethora of cuts sprinkled throughout. Highlights among them are Shaka Loves You’s Get Down, Allergies banger Since You’ve Been Gone, X-Ray Ted’s peak time Get It Started and LTF’s booming King Of Funk. If you want real funk though, you’ll be skipping to The Bamboos’ recent reboot of Black Box’s 1989 Italo House hit Ride On Time as an organic funk number, Gizelle Smith & The Mighty Mocambos’ Time Is Right For Love in its Swing-O AKA 45 remix form and Natural Self’s Alice Russell-featuring gospel-soul style I Don’t Need This Trouble. One track which manages to unite both the funky and the hip-hop sides of this album however (and it’s one of this collection’s highlights to boot!) is The Nextmen masquerading as ‘Randy Maverick’ on their 2002 cut Pure Love on which 60s vocals and soul chords are employed over boom-bap drums providing the perfect segué between hip-hop and funk.

Funk N Beats Vol. 9 then, lots of funk; lots of beats; all party!
(Out 29 October on Bombstrikes)