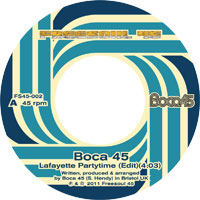 Lafayette Partytime from Bristolian beatmaker Boca 45 gets a seven inch re-release to mark the imminent digital re-release of his Pitch Sounds LP. Boca 45 a.k.a. Scott Hendy is responsible for the monkey’s favourite ever funk, soul, hip-hop club night, ‘Diggin In The Crates’ at Bristol’s tiny, underground (literally) Dojo Lounge. To fully get the picture of a Saturday night at the Dojo back in the day imagine trying to dance to Pharoahe Monch and Patti Drew in somewhere the size of an underlit public phone box that’s lined with red leather and people who resemble drug dealers in the middle of a record breaking attempt to cram as many pissed people into said phone box. Or you could just try listening to this. Soul-sampling b-boy party breaks on both sides.
(Out 2 December on Freesoul 45)

(PRESS RELEASE)
Don’t say Boca’s back; he’s never been away. Scott ‘Boca 45′ Hendy is the Bristol beatsmith who’s been at the forefront of funky breakbeat music for well over a decade. With two solo artist albums in the bag, dancefloor devastating collabos with DJ Andy Smith as Dynamo Productions, and the brand new Beekeepers project with rising star Parker, now has never been a better time to catch Boca 45 fever.

To celebrate the digital re-release of Boca’s first album Pitch Sounds we gonna release a 7″ with Lafayette Partytime and Steady Rockin’ for your turntable pleasures.

Posted on 14th November 2011 no comments