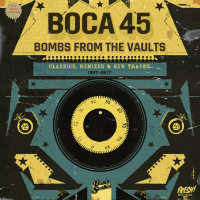 Soon to be unleashed on Bomb Strikes is the aptly titled Bombs From The Vaults on which the man known as Boca 45 drops no fewer than twenty-nine tracks requisitioned from his two decade career both as a solo artist and in multiple musical alliances including Purple Penguin, Dynamo Productions, The Beekeepers and Bocawoody. By way of a sampler, the label unleash four previously unexploded items of breakbeat ordinance both new and old. Classic Dynamo Productions material gets represented via the dusty breaks n cuts instro Gotta Groove while a new material is present in the form of another instrymental, Hand Of God, which takes things further uptempo. The Heavy vocalist Kelvin Swaby jumps aboard to do his rock god thang on groover Round And Round but the pick of the bunch is Boca’s remix of Torpedo Boys’ early 00’s banger Are You Talking To Me. Well, are you? Punk?
(Out 24 November on Bomb Strikes)

Posted on 18th November 2017 no comments