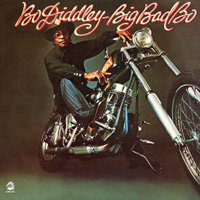 Bo Diddley first forged a legend for himself in the early 1950s on the rnb scene and he was already well into his forties when he dropped funk LP Big Bad Bo in 1974. It wasn’t his first funk album either since he’d already done Black Gladiator. Hmm – man in his forties, radical change in musical direction to what the kids were listening to (i.e. funk) and a picture of himself on the LP cover astride a massive Harley? Are you thinking what I’m thinking? He only needed a trophy wife half his age to complete the picture. Still, anyone who’s seen archive footage of the even older Rufus Thomas prancing around the stage in little boy shorts doing Itch And Scratch will know that middle-aged black men do funk so well that they can get away with what would be career suicide for anyone else. Re-released on Get On Down, so you can get on down in a week or so. CD only though, wax fam.
(Out 12 March on Get On Down)