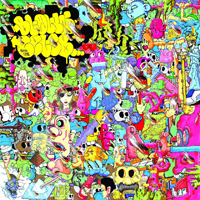 You might not have heard of rappers Swiss Precise and Jon E Rockwell who together form Blown Celeb but you’ll almost certainly have heard of Rockwell from his day job as Dizzy Dustin of Long Beach’s old school party hip-hop crew Ugly Duckling. Blown Celeb is Dizzy’s side project and 1000 Screaming Kamikaze’s (let’s not talk about that apostrophe right now) is their debut album. Many will know of UD’s nearly two decades long pursuance of true school tenets in the face of commercialisation so it will come as no surprise that Blown Celeb are similarly minded. What might come as a surprise however, is Blown Celeb’s sound and lyrics – don’t go expecting the party hip-hop bumps and squeaky-clean lyrics of Dizzy’s other band because BC are – well – a bit darker.

Oddly enough for a band who lyrically big up their home town (Long Beach, CA – the same as UD) so much on tracks like Kali Kings, Blown Celeb have a sound that has more in common with East Coast outfits like the High & Mighty. Indeed the producer on The Hardness turns out to be none other than DJ Mighty Mi himself. It’s the only one produced by him (the other knob twiddlers being UD’s Einstein, Eloqwent, Egadz, Dysposable Heroes, Samplecentric, DJ Remode, Prevent, Illnaughty, ES-9 and DJ Shaq) but there’s a unity of style here in the use of classical samples and the occasional soul loop that makes you think ‘Eastern Conference sound’ – albeit a stoned Californian version. However, despite this outfit’s porn-rap name and the vaguely Boogie Nights handles of our two rappers we’re not lyrically as filthy as the High & Mighty – but then you’d have to being going some to be that dirty. You are certainly going to hear Dizzy cuss though. What’s that? ‘Potty mouth stinking up the microphone’? Yeah – I always wondered how he managed to keep it so clean on five UD albums and the answer of course is that he was saving it all up for Blown Celeb where we find him getting all out of his system with lines like, “I stand firm/ I got my back to the brick/ And fuck all you cats like I got shit on my dick.” In the main however, the lyrics on the LP tend towards stream of consciousness and are frequently battle rhymes referencing everything from pop culture to conspiracy theories. The two-rapper tag team approach is of course completely different to the Dizzy/ Andy dynamic but you’ll be digging Swiss Precise’s sleazy laid-back growl even as it kicks off opener Marathon Man. Look out for Porn Theatre Ushers’ Nabo Rawk, Dilated Peoples’ Iriscience, Edo G and RA The Rugged Man among the guest vocal appearances too.

Treat this on its own merits and you won’t be disappointed – so I say again – this is not like Ugly Duckling in any way shape or form. It’s much more likely to make the head nod than the ass drop but repeated listens reveal 1000 Screaming Kamikaze’s to be something of ‘a grower.’ Think of it as Jon E Rockwell and Swiss Precise’s twenty-two track response to the colossal fleet of shit-hop which currently patrols the airwaves – altogether now: “B-L-O-W-N-C-E-L-E-B/ L-O-N-G-B-E-A-C-H-C-A”!

Check selected tracks the Einstein-produced World Dom and the RA The Rugged Man-featuring Say Aahh below and preview the whole LP below that.
(Out now on Kamikazi Airlines)

Posted on 17th February 2012 no comments