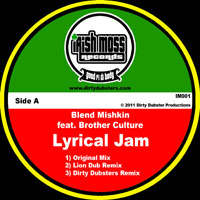 Blend Mishkin gets to be the debut artist released on the Dirty Dubster’s new label Irish Moss Records with Lyrical Jam and comes through with some straight-up dub reggae. He brings along Brother Culture to deliver some righteous vocal vibes and hot damn if he doesn’t get both LionDub and the Dubsters themselves in on remix duties. LionDub goes for the future-dub, space minimalist vote while the Dubsters conform to type in every way and filth up the rhythm with some earthquake-wobbling bass of the variety that sets even heavy furniture to moving across the floor from the vibrations. ‘Ear me now!
(Out now on Irish Moss Records)
IM001 – Lyrical Jam EP by Irish Moss Records
(PRESS RELEASE) Irish Moss Records get straight to Business on their maiden release with a crisp Production from what must be the most prolific and consistent producer on the Island of Greece right now; Blend Mishkin. Blend has enlisted the vocal flow of veteran UK Reggae artist Brother Culture to deliver a skanking Deep Reggae groove that definitely tips its cap to the more traditional Jamaican Sound. Brooklyn’s finest Liondub jumps on board for remix duties and delivers a slick, stripped back moody version with haunting echoes and a throbbing bass which sit perfectly beneath his crystal clear beats. Dirty Dubster’s employ deep sub bass and layer it with a mutating synth line that morphs and moves throughout the track resulting in an aggressive Dubstep version complete with delays, hefty drums and some Wobbling LFO’s for good measure.