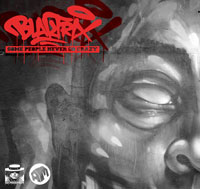 An album with six tracks and an intro? I’ve known longer EPs! Mind you some people are never happy are they? After all, here is one of the UK’s finer rhymers and UK hip-hop’s next-man, Blaktrix with his latest drop Some People Never Go Crazy. Of the best cuts, former single No Drama is the first and it’s here that we find Blaktrix and buddy Ralph Ripshit delivering mellow stoner advice about not getting too hot under the collar about – oohh – anything – pass the rizla there’s a love. Less stepping up to the mic than bringing the mic to the sofa while you have a blaze then. Don’t be fooled though, as noted elsewhere delivery is tight and who should supply that stoned groove but Bristolian emcee cum producer Rola, of Numskullz fame.

Million Dan collaborator DJ First Aid also drops a menacing, stutterfest of a beat on last single Sour Grapes allowing B to demonstrate his not inconsiderable mic skills in a rhyme advising rivals not to get all bitter that they’e just been rinsed – “I could lie and tell you – it takes practice/ But that ain’t fair, only one of us is Blaktrix.” Smug bastard. Other stand outs include the title track where our man reflects on the state of the nation over a chilled piano-led beat or Office Job which extols the massive sense of well-being and inner harmony that Blaktrix has gained from corporate administration and the many transferable skills (constructing balls made of rubber bands and crafting jewellery from paperclips, for example) that he has acquired in this intensely satisfying source of employment “I’ve got an office job – and it’s dry/ I got an office job and it really sucks/ I got an office job working nine to five/ Yo – fuck this off, it’s shit son I’m on the skive.”

Hopefully the Blix is someone who won’t ever go crazy – now that is a skill he needs at the moment – “Oh shit is that Blaktrix in a suit? UK rap don’t pay I’m the living proof.” Hang in there son – people are listening. Title track video below players…
(Out 5 September 2011)

(PRESS RELEASE)
Blaktrix is a name fast becoming synonymous with the new wave of UK talent, which is washing away any evidence of the notion that hip-hop is dead. The Cardiff based emcee caught the bug early, penning his first verse when he was just seven years old and setting in motion a chain of events that would see him tear up his local scene and eventually garner him praise from the likes of BBC Radio One, Hip-Hop Connection, Blues & Soul Magazine and 1xtras Ras Kwame, who crowned Blaktrix his Homegrown Winner three weeks in a row.

Add to that the online success of the video for his single ‘No Drama’,
which featured fellow local hip-hop ambassador Ralph Rip Shit, plus his
last single ‘Sour Grapes’, which was produced by DJ First Aid and has been championed by Adam Walton on his BBC Wales radio show, and you have an artist who is sure to carry on making waves. Blaktrix’s album ‘Some People Never Go Crazy’ is out this autumn and you can be sure that it will continue to give the people what they want.