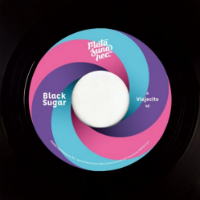 Keeping up the rare Latin vinyl 45 pressure, label Matasuna step up a gear by dropping this first ever vinyl-only reissue of two seventies cuts by Peruvian Latin funk-soul brothers Black Sugar a mere month after the last drop from Enrique Lynch. First up is Viajecito which travels an initially psych-funky road of sinister wah-wah and tribal screams before lightening the mood somewhat by adding in more conventional cheery Latin funky piano, horns and conga. Oh and waits nearly a full two minutes of its five minute length before the vocals kick in. Opening in a far more dreamy manner before picking up to an even faster pace is the flip – legendary Latin northern soul cut Too Late. It’s already sold out on the label’s Bandcamp even though release was mere days ago so don’t sit around.
(Out now on Matasuna Records)