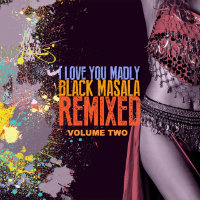 DC-based and world-music-influenced crew Black Masala love you so madly they’re following I Love You Madly Remixed Vol. 1 with a Vol. 2 towards the end of the month. This time it’s the turn of Sammy ‘you don’t hear from him in ages and suddenly he’s everywhere’ Senior, Brazilian bad boy Trotter and Thievery Corporation drummer Congo Sanchez to get their mitts on the album in question. Oh No What Can I Do doesn’t seem to have been a question that crossed either Mr Senior or Mr Trotter’s minds when approaching the track of the same name with the former applying the rule of the wobble and then doubling up for some junglist pressha towards the end while the latter rolls out more traditional nu-funky treatment to the original’s gypsy brass. Which just leaves Mr Sanchez to get all digi-dub at the start of his take on Sounds Of The Underground thus extending the reggae vibe of the original’s intro by the power of Greyskull. Er – I mean by many times.
(Out 20 January on Black Masala)

Posted on 8th January 2017 no comments