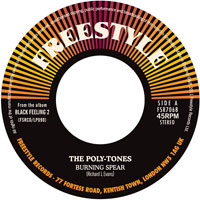 Lance ‘funk is my middle name’ Ferguson of Bamboos/ Cookin’ On 3 Burners fame brings forth the second volume of the Black Feeling project shortly. The central conceit behind this (as with the original) is that Lance and buddies get to cover funk-soul and jazz-funk classics but each one under a different pseudonym. On this album taster, S.O.U.L.’s Burning Spear gets a frantically percussive makeover by ‘The Polytones’ with a Blue Note-style guitar while ‘The Mighty Show-Stoppers’ give Shaft In Africa a slightly harder and faster seeing to than Johnny Pate’s original. Anyone familiar with the original funk compositions of Lanu’s other bands will know better than to doubt his musicianship (or funkiness) though I’m slightly bemused by these covers, one of which jettisons the hook that made the original so big and the other pretty much just adds a bit of energy. Apparently there’s a new Cookin On 3 Burners LP on the way though – here’s hoping for a few more vocal collabos with Fallon Williams. Check below player for what they say about it…
(Out 6 June on Freestyle Records)

Each track was presented under a pseudonym to give the impression of an album you would find whilst digging in a Caribbean record shop or American thrift store. As a collection of reworked classics, the album set dance floors alight across the world, indeed, the single ´Hippy Skippy Moon Strut´ by The Mighty Show-Stoppers became a huge selling 12 inch, and also notched up well over 350,000 individual viewings on You Tube to date!

Now in 2011, Freestyle Records is pleased as punch to be releasing this teaser 45 single that features 2 cuts from the forthcoming follow up album ´Black Feeling: Volume Two´ (FSRCD/LP090) and what total corkers they are too!

The A side is Lance & Co´s fantastic reworking of the anthemic ´Burning Spear´ under the moniker of The Poly-Tones, an intense and driving piece of soulful funk, and what could possibly equal that for the flip side? The Mighty Show-Stoppers giving Johnnie Pate´s blaxploitation soundtrack classic ´Shaft In Africa´ such a convincing and wonderful re-working, you will think you are back in time, on the film set whilst Richard Roundtree (that’s John Shaft to you sucker!) kicks some serious ass!…enjoy!..