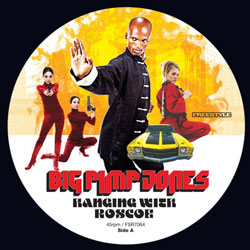 Yep it’s more Philly-funk-from-flicks-that-never-flew time. Those with previous experience of the band will know it’s always 1971 in Big Pimp Jones’ house though that doesn’t stop them trying to prove it. Close your eyes while listening to this and you’ll be whisked into the arms of a couple of dusky beauties clad in little more than skimpy bikinis, who tote sunlight-blocking afros and pump-action shotguns while dudes with names like Shuggy and Bumpy try and shoot your bitch ass because of that crap you pulled last week in Harlem. Horns, breaks, wah-wah…shit son – you know the drill – listen HERE. Press guff below links.
bigpimpjones.com
Big Pimp Jones – Myspace

What happens when you make a sequel to a movie that no one knows about? In the case of Jimmy Ruckus in the Five Fingers of Death, you end up with an overseas. smash !. The sequel of the film that nobody knew experienced a wide theatrical release. In Singapore, according to box office statistics, it was the number 8 movie in terms of gross in 1978 and resulted in a mild cultural phenomenon and catch phrase “I no want you tink I bad girl”.

This rediscovered sequel, Jimmy Ruckus And The Five Fingers of Death, is a curious cinematic effort features over 20 beheadings; naked female assassins using poison lip balm; a chase scene involving a monarail, a harpoon and six bison; and one of the most bizarre sex scenes ever committed to film.

This slamming 45 is a teaser to wet the appetites of those discerning records buyers who flipped, slipped and fell in love with the preceding super rare blaxploitation soundtrack: Bad Bad Jimmy Ruckus.

The A side Hanging With Roscoe presents us with skuzzy drums, finger blistering bass lines and chicken shed saxophone, which is lucky as the vocals inform us that Roscoe makes the best fried chicken and if anyone knows his chicken its Big Pimp Jones! The B side is the pudding in this 2 part food theme funk-out Jump Up, Turnaround Popcorn is a sweet finish to this delicious meal!