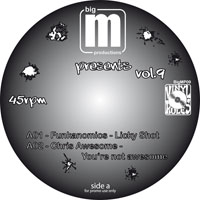 Big M goes bigger and harder than ever with this ‘Banging Artists’ drop. The release rightly leads with Funkanomics scarily heavy Cypress Hill rerub of Lick A Shot – the monstrous ghetto funked-up Licky Shot, then Chris Awesome cooks up a fat one – see what I did there? Have a listen you’ll work it out. Telephunken (clearly not contented with having his own four track EP out on Big M currently) has a bash at reworking Edwyn Starr’s heavy soul hitter 25 Miles (though Prosper & Badboe did have a excellent crack at that a couple of years ago) and finally all is forgiven for Jayl Funk who works point with his heavy breakbeat refix of Sonny J’s Can’t Stop Movin’. That should get their hands in the air. Well, actually, it does, I’ve tried it.
(Out now on Big M Recordings)

(PRESS RELEASE) BigM productions does it again. 4 big names 4 huge tunes! This time the combo contains on side A the Funkanomics with an unbeliveable killer rework and Chris Awesome with a murder mashup and his vinyl debut. Telephunken opens Side B giving a slight taste of what sheer madness more is in the pipeline from them on BigM. The finish does well known NuFunker JayL Funk with a beauty of a floor banging rewind. So, don’t stop movin before 25kms or you’re not awesome and will be getting a licky shot.

A01 – Funkanomics – Licky Shot
Did you every hear a rework of a rap classic that was more insane or sick like this? Noooo! Blast ya speakers!

A02 – Chris Awesome – You’re not awesome
It’s hard to enhance a work of Mr. Cook. But Chris did it! Check out baby, this ultra funkular Slimbo Fat mash. “Check baby check one two!”

B02 – JayL Funk – Don’t stop movin
Spirit will catch up with you on this great hymn blown up with some serious breakbeats for the real floor action!

Posted on 13th February 2011 no comments