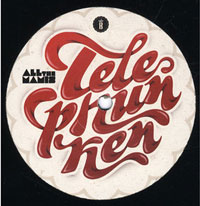 Spanish nu/ghettofunker funker Telephunken gets an EP all to himself on scene label Big M and dials in with four big slices of nu/ghettofunk kicking off with what certain people will insist on calling a ‘titty shaker.’ Mind you calling your track All The Mamis is pretty much asking for that to happen – plus he gets props for managing to shove in a tribute to Del The Funky Homosapien via a Mr Dobalina loop that is manages to be completely irrelevant to the general theme and yet sit nicely in the general groove. Having A Good Time features a not entirely unpredictable vocal culled from the velvet-voiced masterworks of one Shaun Ryder, Clap Yo Handz gives Naughty By Nature’s mellow old school cut a couple of cans of Red Bull leaving It’s Going Down to tell it like it is by transforming jiggy rapper Yung Joc’s bleep-clap borefest into a ghettofunk banger with a decent break and an ACDC sample – less back in black than back with boom-bap. Ole!
(Out now on Big M Records)

(PRESS RELEASE) With the 10th artist presentation BigM Productions introduces the
unbelieveable Telephunken, band combo and DJ show from Spain now in full length with their EP “All the Mamis”. After short previous appearance the crew now definately shows what they stand for: Amazing funky Breakbeat and Bigbeat loaded monsters with foot stomping and floor banging guarantee from slow to fast. Four pure gems nobody shouldn’t miss to spin out!! Clap yo handz and get ya copy!

A01) All the Mamis
“Kick it loud tonight!”. The optimal opener, banging you warm on
perfect prime time breakbeat dope! Yessssss!

A02) Having a good time
You will have a good time on this. For all the sunny vibe lovers
and good mood groovers, enjoy this unbelieveable party! Bigbeat
never died!

B02) It’s going down
The finish does this heavy rock influenced breaker with unbelieveable vocaling action on sheer e-guitar madness. Rock it!

Posted on 12th February 2011 no comments