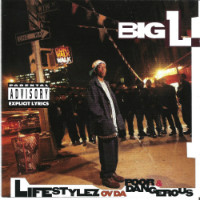 It’s another 90s hip-hop twentieth anniversary – which these days means it’s time for another Get On Down prestige re-issue. Getting the treatment this time is D.I.T.C. affiliate Big L who sadly won’t be celebrating the re-release of his debut LP Lifestylez Ov Da Poor & Dangerous since he very much lived it like he rapped it and was the victim of a driveby shooting by an unknown assailant(s) in 1999.

The 12-track LP was produced by Showbiz, Buckwild and Lord Finesse and originally release in 1995. It featured two commercial songs – Put It On and MVP though with hindsight funky throwback No Endz, No Skinz probably should have been too – though in fact the quality of beat and verse is classic throughout.

The re-issue comes in a variety of cd, vinyl and cd and vinyl packages with detailed liner notes. And the fact that CD editions come in a deluxe outer box featuring the original artwork while the LP comes with an 18″ X 24″ poster may well prompt heavy breathing and thigh-rubbing from the re-issue fetishists.
(Out now on Get On Down)