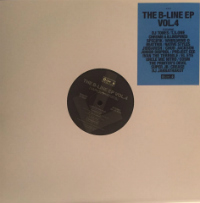 A fat but complex double-bassline heralds the intro to Beattrix & Native Styles’ contribution to Vol. 4 of B-Line Recordings’ The B-Line EP Vol. 4 and then the drums kick in for emcees Reachwun and Strange Man Called Seb to lace with bars. Since two of the four skills are thus represented, perhaps a video representing the two remaining skills to provide the correct ambience? A nearly four-minute montage of b-boy showdowns interspersed with footage of the occasional urban space being creatively appropriated by people with marker pens and spraycans? That’ll do nicely. It’s all about that bassline though.
(Out now on B-Line Recordings)