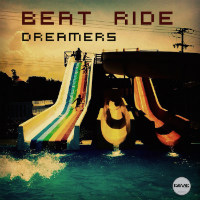 Did you overdo it over the new year? You did didn’t you? You’re never drinking again, work should be banned…where’s your duvet? What you need is something to capture your mood – not too energetic, smokily evocative, perhaps a little sombre and tinged with bluesy regret. Say hello to Beat Ride‘s trip-hoppy new whose four track Dreamers EP. Another Bad Day is the one for those who haven’t got rid of their hangovers yet where a vocal from Beat Ride herself, Antigoni Kostala, results in an almost Bond-theme-ish vibe. The opener and the title track both employ slightly more energy with a moody lowkey rap from The Mage on the former while the closer, People, is suitably atmospheric in an epic string-laden, ‘where did it all go wrong?’ manner. You can almost visualise the camera zooming out from slo-mo footage of the man running in the snow for the last train out of the warzone and stumbling as he falls beneath a hail of bullets. Or something.
(Out 18 January on Kraak Records)

Posted on 5th January 2016 no comments