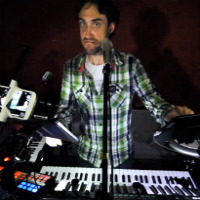 Beardyman has risen to fame via his ridiculous facility with a vocal skill ostensibly associated with hip-hop – beatboxing – though frankly, at the stage he’s at, it’s less Planet Rock, than interplanetary travel. Winning the UK Beatbox Championships (twice) firmly cemented his reputation and his various videos on Youtube (the now legendary Kitchen Diaries for example) with viewing figures in the millions haven’t done his reputation any harm either. Oh – and then there’s the live shows which have wowed crowds as he records, loops, samples, and otherwise augments his voice using stupid amounts of kit. ‘Stupid’ being the operative word there since apparently said kit didn’t have the capability to fully realise the full Beardy ‘live show vision’. There was only one thing to do – design his own…which has now been unveiled as the Beardytron 5000 Mk II. Wonder what happened the Mk 1…anyway, according to Beardyman, “The system is built from the ground up in C++ and objective C by Dave Gamble of DMGAudio and employs 15 instances and counting of a partly bespoke version of Sugarbytes’ incredible linear-8-way-morph-engine controlled multi-effect ‘Turnado”. Well, of course.