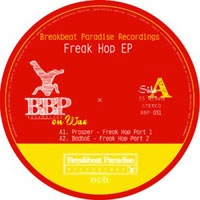 It says here that the ‘freak hop’ concept was invented by long time Badboe cohort Prosper. ‘Freak hop’, in case you were wondering, seems to be like a mash-up for those with terminal ADHD since it involves combining not two or even three previously recorded tracks but as many as can possibly be crammed into between 4 to six minutes. Didn’t that used to be called a minimix? Whatever it is, the main elements of all the tracks are culled from the golden era of hip-hop and the five producers involved (Prosper, Badboe, Breakbeat Junkie vs. DJP and Audited Beats) stitch them together like freaky, demented sound surgeons into four hip-hop – er – centipedes or something. How’s that for a metaphor with legs? Should you feel inclined to fly your freak flag, get your freak on or be a freak like me, you don’t even have to wait because it’s out right now, correctly, on vinyl. ‘Ave it!
(Out now on Breakbeat Paradise Recordings)

(PRESS RELEASE)
BBP Recordings is back harder than ever with pure DJ dynamite from the absolute elite producers in the Nu Funk/Ghetto Funk scene. DJ Prosper (BigM, BBP), BadboE (Good Groove, Bombstrikes, BBP), Breakbeat Junkie (Good Groove, Manmade), DJP (Good Groove, Bureau 45) and Audited Beats (Good Groove, Punchout) all united to mashup, chop up and cut up some of best funky joints of all time into 4 mindblowing tracks under the codename Freak Hop!

The sample source on this release is about a mile long and the grooves and beats are as fresh as can be which makes this a truly timeless record. From oldskool funk to soulful grooves and hip hop – its all in here mixed in a way you’ve never heard before.

BBP – Freak Hop EP – Tracklist
A1. Prosper – Freak Hop Part 1
DJ Prosper from France is the inventor of the Freak Hop concept and kicks of the EP with his groovy oldskool Part 1.

A2. BadboE – Freak Hop Part 2
BadboE picks up freaky vibes and pumps some b-boy street jams into the mix on Part 2.

B1. Breakbeat Junkie vs. DJP – Freak Hop Part 3
On the flipside its UK’s grooviest producer team Breakbeat Junkie and DJP who has dusted off and brought to life some of the greatest funk jams all mixed to perfecting on this superb funky Part 3.

B2. Audited Beats – Freak Hop Part 4
Finally Canadian beatmaster Audited Beats is slowing down the grooves and bringing on some real dirty street boogie on Part 4.