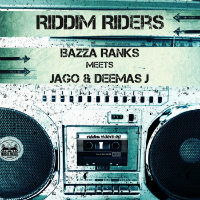 Remember when Jamaican dancehall became obsessed with boom-bap beats? To be fair, it was around the time when everyone was obsessed with boom-bap beats which is to say the 90s – a sound and era celebrated in three-tracker the Riddim Riders EP from Dirty Dubsters’ Bazza Ranks and Tru Thoughts vocalists Jago and Deemas J. Oohh – does that mean three helpings of rapid-fire patois over speaker-shaking bass and drums? Do bashment events reek of ganja smoke? Of course it does. And the absolute killer is the closing tribute to Babylon, Policeman, on which we find that Jago and Deemus dem nah like the boys in blue for some reason. Players and video for title track Riddim Rider below.
(Out 21 July on Irish Moss Records)